While President Biden continues to fumble his way
through heavily-scripted public appearances, the mainstream media
is working overtime to prop up his failing administration and
promote his immensely unpopular agenda.

Many in Washington are still pretending nothing is
wrong, but the writing on the wall couldn’t be any clearer.

Recent public opinion polls from across the spectrum
- Harris, Monmouth, Gallup and even CNN - show the Biden-Harris
Administration failing the American people on nearly every front.

* Only 18% of Americans strongly approve of the job President Biden
is doing;
[link removed]

* 63% of Americans say the economy is weak;
[link removed]

* 70% of Americans are ready to move on from COVID while Biden is
stuck on vaccine mandates, vaccine passports, masks and
lockdowns;
[link removed]

* Only 27% of Americans say their financial situation is getting better;
[link removed]

* Trump is seen as a better President by 53% of Americans,
including 55% of Independents and 12% of Democrats; and
[link removed]

* 59% of Americans disapprove of the way Biden is handling
immigration/border security.
[link removed]

* Rejecting out of control spending that is driving
up the cost of everything;

* Fighting to end policies that take away our freedom and harm
our economy – vaccine mandates, reliance on China, open borders,
and taxpayer handouts to illegal immigrants; and

I hope you will join me as I work to PUT AMERICA
FIRST ( [link removed] )!

If you are able to contribute a small donation of
$10, $25 or $30 ( [link removed] ) to our
campaign, you can help us get the word out and win back the
Congressional majority to put America first and stop destructive
Biden-Harris policies.

Paid for by Friends of Bill Posey 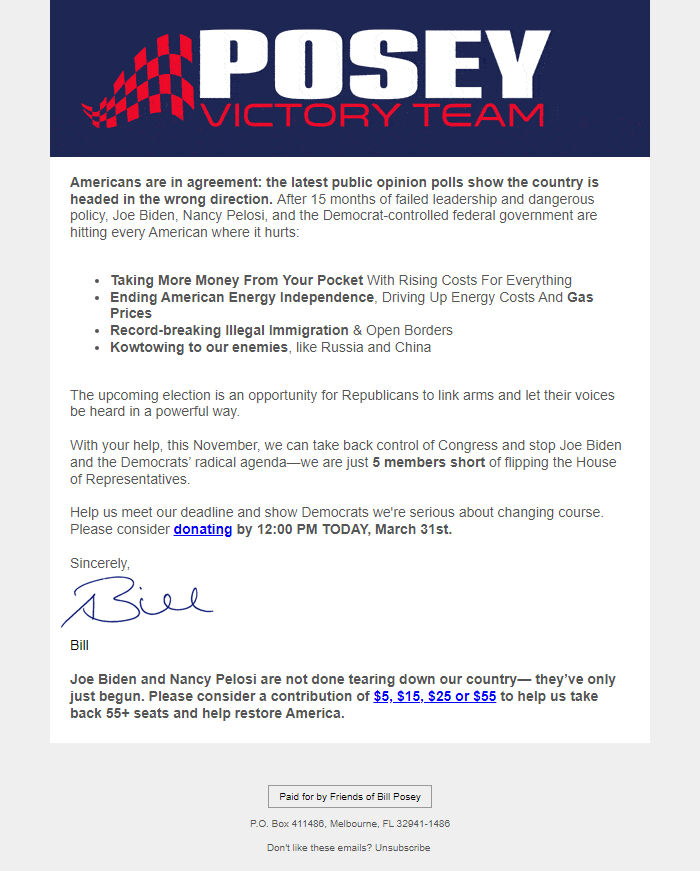